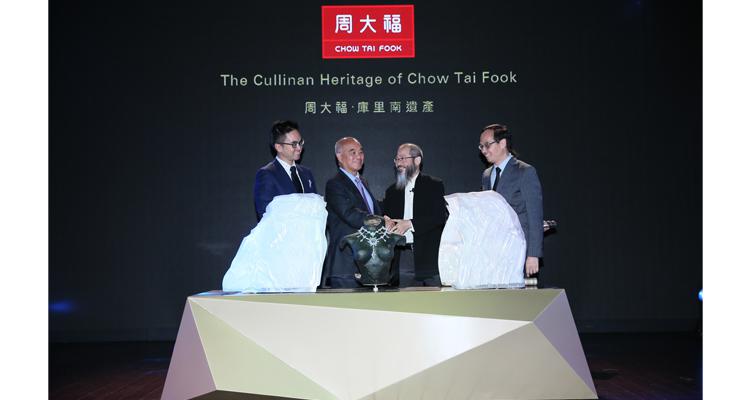 The 104-carat diamond cut from the rough stone Cullinan Heritage is one of the biggest and rarest diamonds in the world: D colour, internally flawless, round brilliant-cut, 3-Excellent.

Chow Tai Fook made the rare decision to use the entire family of all 24 DIF diamonds cut from one rough stone, the Cullinan Heritage, in one jewellery masterpiece – the first such attempt in contemporary China. 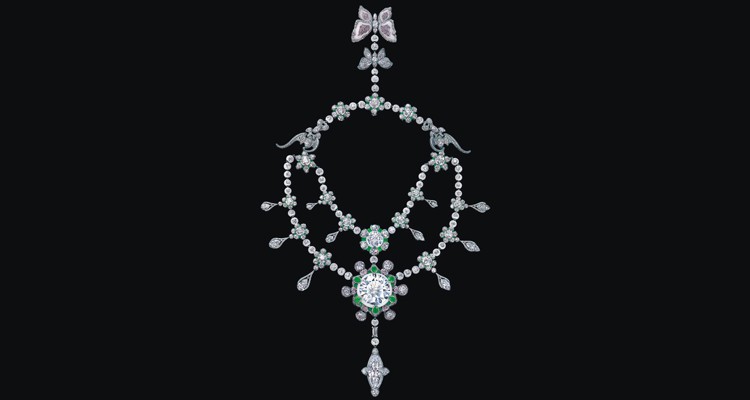 Created by Wallace Chan, world-renowned jewellery artist, the uniquely modular masterpiece “A Heritage in Bloom” which can be worn in 27 different styles represents a timeless work of art.

One of the rarest diamond masterpieces to emerge from contemporary China

Chow Tai Fook Jewellery today unveiled “A Heritage in Bloom” – one of the most significant diamond masterpieces of such creative and intricate artistry to have emerged from contemporary China.

Created by world-renowned jewellery artist Wallace Chan, the piece is centred upon 24 D-colour internally flawless (DIF) diamonds cut from the Cullinan Heritage, an exceptionally rare 507.55 carat Type IIA rough diamond Chow Tai Fook acquired in 2010, and subsequently spent three years cutting and polishing. The largest piece, the 104 carat DIF brilliant round diamond with the highest possible cut grade of 3-Excellent, is one of the largest of its kind ever made. “A Heritage in Bloom” also boasts the singular quality of uniting an entire family of diamonds cut from the same rough stone within a single piece of jewellery, an artistic decision unheard of in a contemporary piece.

Dr. Henry Cheng, Chairman of Chow Tai Fook Jewellery Group said, “Today we complete a journey we began five years ago, and we could not be more proud of the exceptional and historic creation that has emerged. Continuing the Cullinan legend, the world-renowned Master Jewellery Artist Wallace Chan has brought the Cullinan diamonds to life.  “A Heritage in Bloom” embodies Chow Tai Fook's commitment to Chinese culture, patronage of the arts and statusas a diamond expert. We consider it to be a work of art that will last the ages as the crown jewel of the Chow Tai Fook brand.”

“A Heritage in Bloom” also brings together thousands of white diamonds and hundreds of pink diamonds, totaling 383.4 carat, as well as more than one hundred pieces of green jadeite and mutton fat white jade. The creation of this masterpiece represents more than 47,000 hours of efforts and craftsmanship. Uniquely modular, it can be worn in 27 different styles, showcasing the sophistication of the design and exquisite composition that is beyond comparison.

“This is my very first collaboration with Chow Tai Fook,” said Wallace Chan. “We have a shared dream – to realise a creation that can be passed on from generation to generation with this once-in-a-lifetime encounter.”

About the Cullinan Heritage

A rare Type IIA rough diamond, the Cullinan Heritage is world-renowned for its extreme clarity, flawless quality and noble heritage. It was discovered in 2009 in Gauteng Province, South Africa at the Cullinan Diamond Mine, where the majority of the world's most famous diamonds have been uncovered. Other important diamonds unearthed there include The Cullinan Diamond, the world's largest ever discovered, in 1905 that to this day still forms a major part of several of the British Crown Jewels.

Wallace Chan founded his own gemstone carving workshop when he was 17.

In 1987, he invented the “Wallace Cut”, an illusionary carving technique that transcends dimensions. As a result, he was crowned the “Carving Prodigy from Asia” by European media. In 2001, after a decade immersing in Buddhist art, he created the Great Stupa for Fo Guang Shan, Taiwan.

Chan also spent 8 years to experiment with titanium, the most bio-friendly metal known to date. He surprised BASELWORLD 2007 with a series of jewellery creations featuring ethereal titanium structures, the technical secrets of which he later unveiled to the world.

International media has featured Wallace Chan extensively, introducing his creations as well as innovations, to name but a few – the patented jadeite thinning and luminosity enhancing technology, and his revolutionary gemstone-setting-gemstone technique.

Today, Wallace Chan is recognized as the jewellery creator, artist and philosopher.